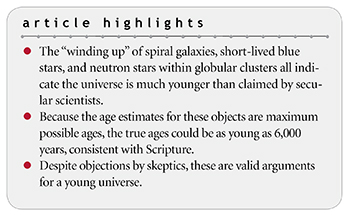 “Winding Up” of Spiral Galaxies 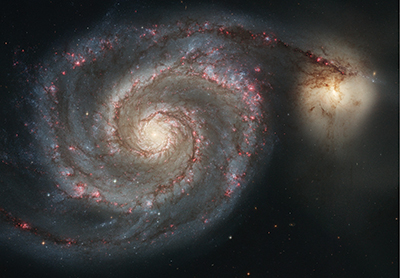 Figure 1. The Whirlpool Galaxy is a well-known spiral galaxy.
Image credit: NASA and ESA. Used in accordance with federal copyright (fair use doctrine) law. Usage by ICR does not imply endorsement of copyright holder.

Spiral galaxies are so named because of their beautiful spiraling arms (Figure 1). A spiral galaxy slowly spins around an axis of rotation perpendicular to its disk. Stars, dust, and gases closer to the axis of rotation take less time to complete a revolution than material that is farther out. As a result, the spiral arms “wind up,” and eventually the spiral shape becomes unrecognizable. Back-of-the-envelope calculations and simplified models suggest that a few hundred million years of additional winding would cause the spiral structure to become noticeably tighter than what we observe. However, some astronomers claim the spiral structure would be completely destroyed in a few hundred million years!2 In any case, winding would certainly have obliterated the spiral structure after five billion years or so (Figure 2). Yet secular scientists claim that many spiral galaxies, including our own Milky Way galaxy, are around 10 billion years old. If this is the case, then why are they still recognizable as spiral galaxies? 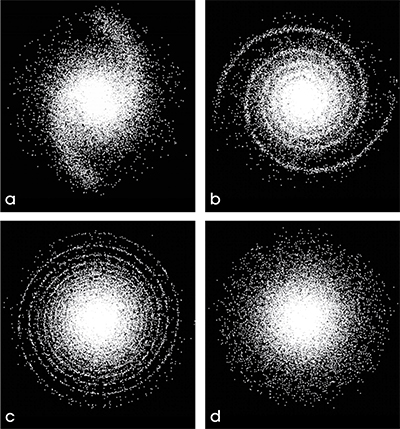 This argument assumes that the spiral arms are physical objects and that the same material remains within a particular spiral arm over time. Secular scientists argue this isn’t necessarily the case. They claim spiral arms are not real physical structures but are instead high-density areas that rotate around the galaxy at a different rate than the disk materials. These high-density areas are similar to obstructions or “clogs” of cars in a traffic jam. These traffic obstructions persist over time, even though different individual cars are continually passing into and out of the “clog.” In a similar fashion, secular scientists would argue that different stars, as well as gases and dust particles, are continually moving through the high-density regions. Supposedly, this allows the spiral structure to persist for billions of years. It also supposedly allows the formation of new stars.2

However, it’s premature to say that this “spiral density wave” model solves the problem. It was proposed in the 1940s and refined in the 1960s, but secular scientists are still working on it.3,4 The results of computer simulations have been inconsistent, with some seeming to confirm the theory5 and others appearing to contradict it.6,7 One such simulation suggested that the stars really do rotate with the spiral arms after all.7

Secular astronomers have admitted the theory has difficulties. What causes the density wave in the first place?8,9 What maintains the wave over time?8 According to an online astronomy encyclopedia:

The density wave model is a work in progress, with one of the big remaining questions being how the density waves survive for such long periods. Given the enormous amount of energy required to compress the interstellar gas and dust, one would expect them to die away over time.10

For these reasons, spiral galaxies are a valid young-universe argument, regardless of secular objections. 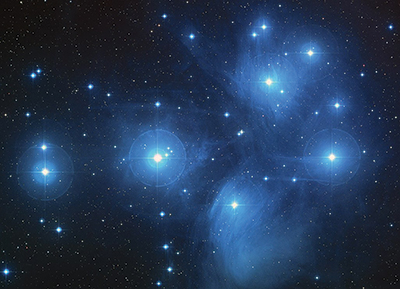 High-mass stars are hotter and bluer than less massive stars, and they consume their nuclear fuel much more quickly. By secular reckoning, a hot blue star with a mass 15 times greater than our sun has a lifetime of just 15 million years (Figure 3). The very hottest blue stars, with masses around 25 times greater than our sun, have lifetimes of just a few million years.11 Creation astronomer Ron Samec pointed out that these estimated lifetimes are based on computer models of stellar evolution. These models are calibrated by assuming that our sun is 4.6 billion years old.12

Yet nothing requires scientists to make this assumption. Famed solar astronomer John Eddy once stated:

I suspect…that the sun is 4.5 billion years old. However, given some new and unexpected results to the contrary, and some time for frantic recalculation and theoretical readjustment, I suspect that we could live with Bishop Ussher’s value [about 6,000 years] for the age of the earth and sun. I don’t think we have much in the way of observational evidence in astronomy to conflict with that.13

Creation scientists argue that the sun and stars are truly just thousands of years old. So, these estimated star lifetimes, obtained by assuming our sun is 4.6 billion years old, could have large errors. In any case, even by secular reckoning hot blue stars can only last millions of years before they eventually explode. So, if the universe is 13.8 billion years old, why do hot blue stars still exist?

Secular scientists claim new stars are born to replace old blue stars that have died. The spiral density wave model supposedly explains the continued presence of blue stars in spiral galaxies. But, as noted earlier, this model has problems. And what about blue stars found in places other than spiral galaxies?

Furthermore, naturalistic star formation, though perhaps barely possible, is extremely unlikely. Astrophysicist Neil deGrasse Tyson, no friend of the creation movement, once remarked, “The scary part is that if none of us knew in advance that stars exist, front line research would offer plenty of convincing reasons why stars could never form.”14

One of these reasons is that secular star formation theories require at least one generation of stars to already be in existence.15 But a theory of star formation that needs pre-existing stars is not very convincing! The very existence of billions of stars in our universe is a silent rebuke to the Big Bang model, and the continued existence of hot blue stars is an argument that our universe is young. 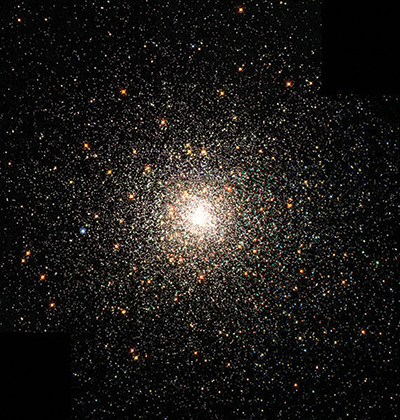 Figure 4. Messier 80, one of the densest of the Milky Way’s 150 or so globular star clusters.
Image credit: NASA and ESA. Used in accordance with federal copyright (fair use doctrine) law. Usage by ICR does not imply endorsement of copyright holder.

Neutron stars within globular clusters are a problem for old-universe beliefs. As the name implies, a neutron star is composed of subatomic particles called neutrons. A typical neutron star may have a mass about one-and-a-half times greater than our sun, but this material is squeezed into a body only 10 miles across. This means that neutron stars are incredibly dense: A tablespoon of neutron star material would have the same mass as Mt. Everest!17

Neutron stars are thought to be formed in certain supernova explosions. Neutron stars receive a noticeable “kick” from the explosions, giving them speeds very different from their “parent” stars. These speeds can be hundreds or even thousands of kilometers per second.

Furthermore, the innermost stars within some globular clusters are rotating around a central axis. Yet gravitational interactions between stars should have long ago erased any such rotational tendency.

Theory and numerical simulations of globular clusters indicate that any central rotation should be erased on relatively short timescales. Because these globular clusters were formed billions of years ago, we would expect that any rotation signature would have been eradicated by now.21

What about Distant Starlight?

Distant galaxies are millions, and even billions, of light-years away from us. Since the speed of light is finite, secular scientists argue that distant starlight must take millions and billions of years to reach us.

Creation scientists disagree. The Hebrew text in Genesis demands that the light from stars was emitted on Day 4 of the creation week and that it also arrived that same day.22 Perhaps this was a bona fide miracle, or perhaps the laws of physics God established allow distant light to naturally reach us in a short time. If the latter, then the solution almost certainly involves Einstein’s theory of relativity, and creation scientists have proposed a number of suggestions as to how God may have done this. It should be noted that the Big Bang model has its own version of this problem, which is one of the main reasons secular cosmologists added inflation theory to the model.23 But inflation theory has become so strange that even secular scientists have harshly criticized it.24

Other deep-space objects also pose problems for deep time. Secular scientists claim that distant supermassive black holes formed less than a billion years after the supposed Big Bang, but they have difficulty explaining how such enormous objects could naturally form so relatively quickly.25 Transitory structures in the Eagle Nebula’s Pillars of Creation are so short-lived that secular scientists think it is an amazing coincidence we are able to observe them today.26

Despite the dogmatic assertions of secular scientists, their claim that the universe is billions of years old is not a foregone conclusion. Challenges confront both the creation and secular models, but the preponderance of evidence clearly favors recent creation.