When you read the New Testament, do you intentionally try to think like a first-century Jesus follower to capture the visceral excitement of the early Christians? What was the first-century understanding of the kingdom of God? What is the real meaning of the resurrection in its original context? As 21st-century people, how do we recover the adventure of what it was like to live as Christians in the first or second centuries in the world of Second Temple Judaism amidst Greco-Roman politics?

In this Q&A, N.T. Wright (@profntwright) and Michael Bird (@mbird12) talk about their book, The New Testament in Its World: An Introduction to the History, Literature, and Theology of the First Christians (Zondervan, 2019).

Before we get into specifics of the New Testament, how would you describe the grand narrative of Christian theology?

N.T. Wright and Michael F. Bird: Christian theology is storied theology. It tells the grand narrative about God and God’s relationship with the world, from creation to new creation, with Jesus in the middle. The narrative concerns a creator and his creation; humans made in this creator’s image and called to perform certain tasks; the rebellion of humans and the dissonance of creation at every level; and particularly about the creator’s acting, through Israel and climactically through Jesus, to rescue his creation from its ensuing plight. The story continues with the creator acting by his own Spirit within the world, to bring it towards the restoration and new flourishing which is his intended goal.

A great deal of Christian theology consists of the attempt to tell this story as clearly as possible, and to allow it to subvert other ways of telling the story of the world, including those which offer themselves as would-be Christian tellings but which, upon close examination, fall short in some way or other.

On top of that, this story also constitutes a worldview, a way of understanding the realities and relationships in the world as we perceive them. Worldviews are the basic stuff of human existence, the lens through which the world is seen (a ‘worldview’ is not what you look at but what you look through). It generates a blueprint for how one should live in the world, and above all the sense of identity and place which enables human beings to be what they are. The New Testament thus provides the basis for a theology and a worldview in which we can explain and enact, under the guidance of the Spirit, several things universal to human experience: justice, spirituality, relationships, beauty, freedom, truth, and power. A Christian worldview tells us what those things mean, what to do with them, how to enjoy them, and how not to abuse them. A Christian worldview, focused on such topics, will enable us to engage in authentic worship, enact the Christian vocation, and promote the flourishing of humans, individually and together.

[Browse books by NT Wright in the Bible Gateway Store] 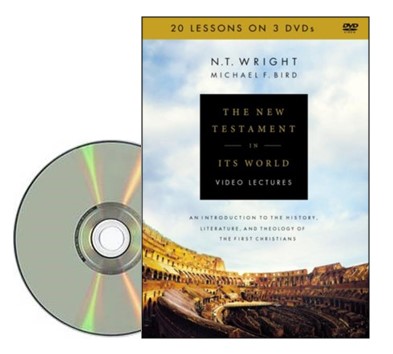 How does the New Testament matter today?

N.T. Wright and Michael F. Bird: In several ways. The New Testament, of course, holds out a faith to confess. It makes alarmingly specific claims about God, Jesus, and the Holy Spirit. It provides clear and bracing teaching about how to live. But none of this should obscure the fact that the truth of which the New Testament speaks is always deeply personal: indeed, it is a person, Jesus, Israel’s Messiah and the world’s Lord, the one in whom God’s truth is incarnated and his purpose accomplished. Biblical truth is not, in the last analysis, simply a series of propositions to be put in their logical order. It is a story, a story that climaxes in Israel’s Messiah, Jesus, and finds its ultimate resolution in the final new creation. Unless we know that story and know how the New Testament authors are rehearsing it and retelling it, we will never quite grasp what the early Christians were wanting to say.

Doing biblical theology, therefore, is not just a matter of knowing the facts about the faith and organizing them through the correct system. Christian theology is about knowing the story, its plot, the characters, the protagonist, the villains, the struggle, and the resolution. And then – most of all – knowing the church’s place, and one’s own place, within that story, the ongoing act of the divine drama. Doing biblical theology means learning your lines, playing your part, and discovering a new way not only of viewing the world but of acting within the world.