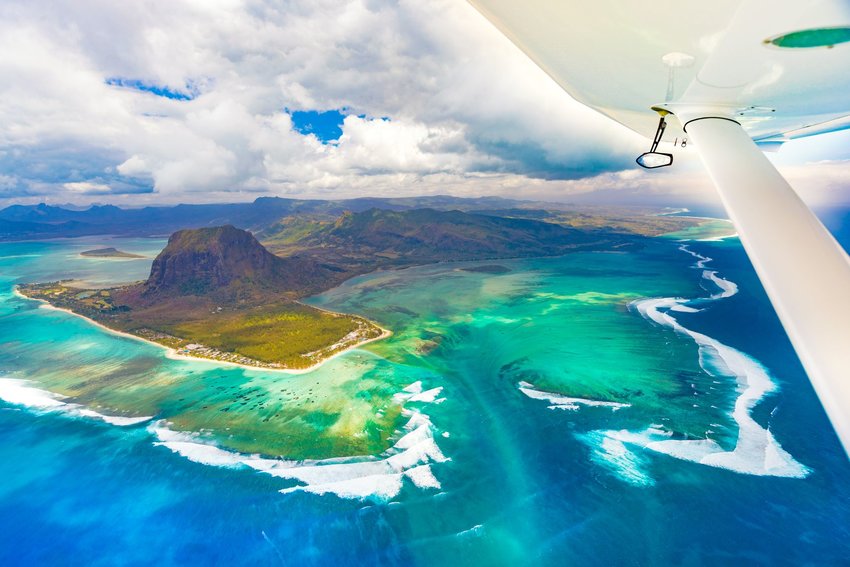 Mauritius is a small tropical island out in the middle of the Indian Ocean off of the coast of Madagascar. It’s known for its beaches and perfect weather. But the most magical sight in Mauritius sits off of the beaches in the area of Le Morne.

Take a helicopter ride off of the southern coast of the island, and you’ll see what appears to be an underwater waterfall. According to CNN, the movement of the sand on the ocean floor is what creates the optical illusion. The silt makes it appear as if there is water flowing off the edge of an underwater cliff and going deep into a cavern below. In reality, that area is pretty flat, and the water movement is no more mysterious there than off any other coast around Mauritius. Even if it’s not real, it’s a pretty spectacular sight. That’s why there are so many helicopter tours available to take tourists to see it. 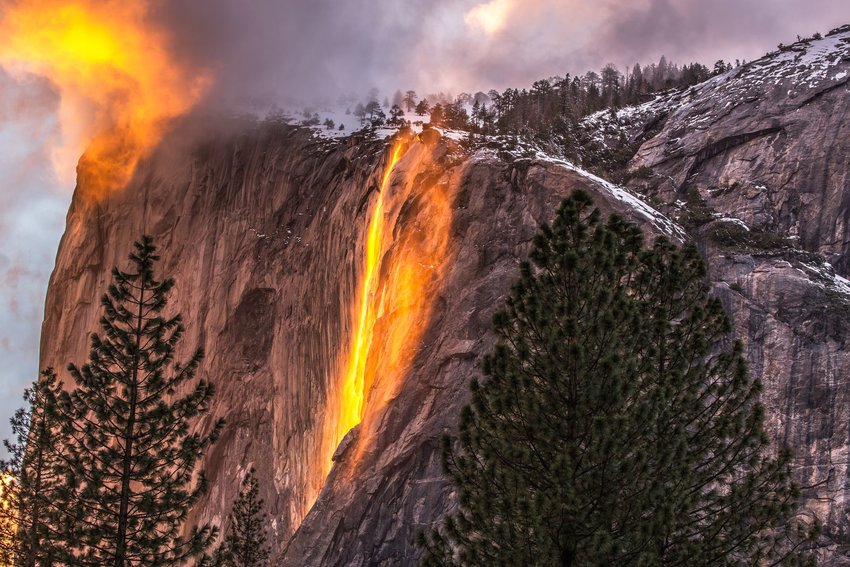 You’ll need to time it just right to see this mind-boggling optical illusion. For most of the year, Horsetail Falls is a small waterfall on El Capitan in Yosemite National Park. According to the National Parks Service, though, something magical happens at the waterfall at sunset towards the end of February. During this time, the waterfall looks as if it’s on fire. That’s earned it the nickname Firefall. The reflection of the sun hitting the falling water just right is what makes it look like lava pouring over the edge of the mountain.

It’s not only the time of day and the time of year that you’ll need to get right, however. There is an element of luck if you want to see this optical illusion in its full glory. That’s because you’ll need Mother Nature to cooperate as well. If there is even a little bit of cloud cover, it can completely ruin the illusion. But visitors remain undaunted. The optical illusion is now so popular that it has forced the National Parks Service to implement new rules. There are now limited areas for viewing in an effort to reduce traffic jams.

If you manage to visit at the right time of the year, during the right time of day, and under the perfect weather conditions, you’ll get to see the illusion for about 10 minutes. After that, the sun dips down, and Horsetail Falls goes back to boring old water. 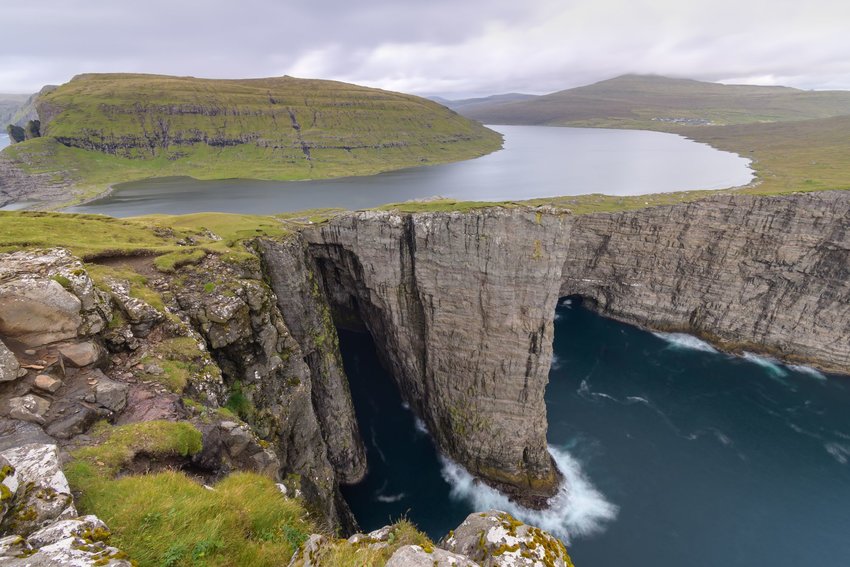 Sandwiched between Iceland and Norway, the Faroe Islands sit isolated in the North Atlantic Ocean. Like their northern neighbors, the islands are known for rugged, breathtaking landscapes. One of the most interesting sights on the islands is Lake Sørvágsvatn, a long winding lake. The lake itself is gorgeous, no doubt, stretching from the middle of the island of Vagar to the coast. It then tumbles into the Atlantic Ocean below via waterfall, which is a beautiful picture in its own right. Take a photo of this lake from the right angle, though, and it appears that it’s dramatically perched hundreds of feet above the ocean.

The truth is a lot less dramatic (but still pretty impressive). The lake is actually only about 90 feet above the sea. It’s the cliffs that surround the lake that create the dramatic illusion of height. The cliffs actually soar hundreds of feet higher than the lake itself. So it’s simply a matter of lining up your camera angle correctly to get the perfect, mind-bending shot.

The British put this optical illusion to work for them during WWII, too. According to Interesting Engineering, the British army built an airport west of the lake. The cliffs surrounding it obscured the airport from view from passing German warships. 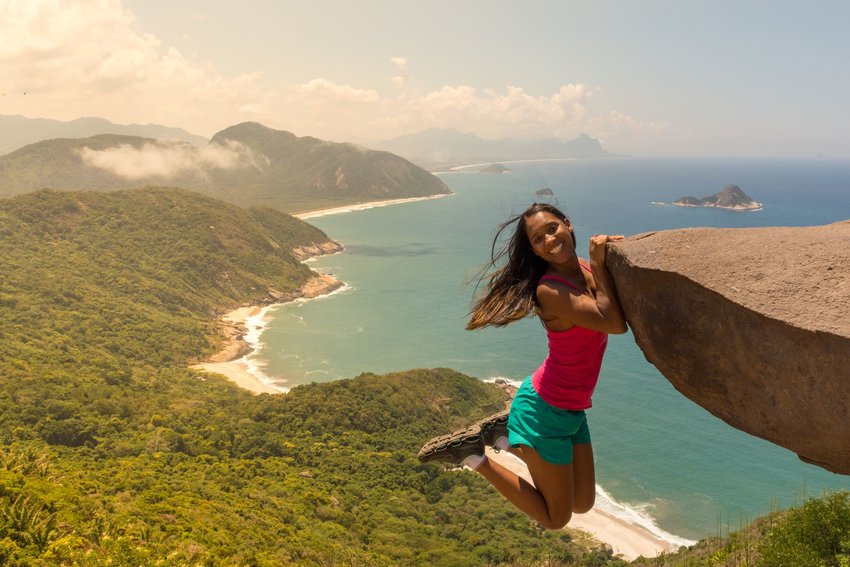 Want to get a death-defying photo that will impress your social media followers without actually risking life and limb? Then this is the optical illusion for you. According to Rio Travel, Pedra do Telegrafo is a rock along a hiking trail about an hour’s drive from Copacabana. The trail takes about an hour at a moderate pace, according to Rio Natural, with plenty of places along the way to take a break and soak up the sights. The hike itself is worth the trip with breathtaking views of the surrounding coastline, jungle, and cities. But it’s Telegraph Rock that most people come to see — or come to pose on.

Taken from the right angle, visitors can create the illusion that they are hanging off of a cliff thousands of feet above the ocean. It’s a heart-stopping photo that’s sure to have friends questioning your sanity — that is, until you tell them that solid ground is only about three feet below you. It’s simply (and cleverly) out of frame. It’s become such a popular photo destination for Brazilian visitors that there are professional photographers on hand to help you get the perfect shot. There are often water and snacks sold by entrepreneurial vendors along the trail, too. You’ll be glad that they are there because you can expect to be in line for one to six hours waiting for your turn to pose on the rock.