Earth is about 70% water, according to the United States Geological Survey. While the oceans contain an incredible 96.5% of all the liquid water found on the planet, lakes, rivers, streams, and seas all contribute to the world’s water supply. Some of the bodies that hold some of the remaining fraction of water are pretty famous. Most people have heard of the Great Lakes or the Mediterranean Sea. At the same time, there are some bodies of water that are pretty obscure but definitely worth knowing. Here are five bodies of water we bet you’ve never heard of.

The Spotted Lake is appropriately named. The surface of the lake looks — you guessed it — spotted. There’s more than just its spotty appearance that makes this place special. In fact, the Canadian Broadcasting Corporation calls it magical. But you’ll need to time your visit right to experience the magical site for yourself. If you visit the Spotted Lake during the cooler months, you’ll see a lake that looks pretty much like any other in the Canadian wilderness. Visit it in the summer, and you’ll find something totally different. Minerals flow into the lake throughout the year. Those minerals form into pools of colored water as the lake start to evaporate in the warmer weather and then further develop into colored spots. The colors will vary depending on what minerals the spotted pools contain. However, you are sure to see something pretty incredible if you visit this lake the next time you visit Canada.

If you’ve ever walked the streets of New York City, then there is a good chance that you’ve walked on the natural asphalt found in Pitch Lake, Trinidad. According to Caribbean Affairs, NYC officials used pitch from the lake to pave some of the city’s streets. That’s because the lake is actually the largest natural asphalt deposit in the world. That makes it quite a sight. Under the water of the lake, you’ll find thick, muddy tar and dried chunks of asphalt along the shores. It’s made from oil seeping up into the lake from underneath the lake bed and then evaporating over thousands of years. Miners have taken more than 10 million tons of asphalt from the lake since 1867, according to USA Today. They use this natural asphalt all over the world.

Another appropriately named body of water, Boiling Lake gets its name from the fact that the water is literally boiling inside of it. The lake sits inside Dominica’s Morne Trois National Park, a World Heritage Site. According to Virtual Dominica, you’ll need to hike about four hours one way through the National Park to get to where the lake sits. Once you are there, you can sit on the shore and enjoy the scenery as the murky waters churn below you. The water boils thanks to the lake’s position over a volcano, according to Amusing Planet. The water reaches down through a crack deep into the earth to where the lava sits below the surface, heating the water up to its boiling point. The water levels fluctuate, too, so you never know how full or empty the lake may be on your visit. Some people choose to swim in the water during colder weather, but visitors should be cautious. It’s named Boiling Lake for a reason. 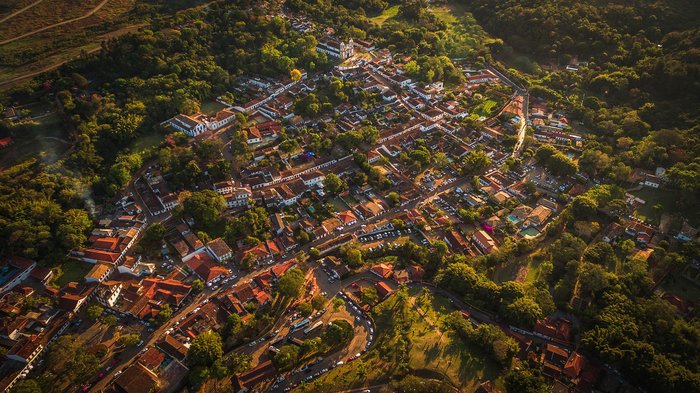 Salar de Uyuni is the world’s largest salt flat. It sits high in the Bolivian mountains, and according to Lonely Planet, covers an impressive 4,633 square miles. That’s a lot of salt. In the dry season, the salt flats create a white desert landscape. That’s beautiful to look at, but adding water to this salt desert is what makes it magical. The Culture Trip notes that when the rainy season arrives, it completely changes the landscape of the salt flats. Visit Salar de Uyuni between December and April, when the salt flat turns into a salt lake. The lake is shallow and usually completely still, so it creates a mirror-like effect on the surface of the water. Talk about an Instagrammer’s paradise!

Love lakes? Enjoy looking at gorgeous waterfalls? Dreaming of sparkling turquoise waters in a friendly-yet-affordable European destination? Then Plitvice Lakes in Croatia is the place for you. Plitvice Lakes National Park became Croatia’s first National Park in 1949, according to the park’s official website. It became a World Heritage Site 30 years later. The site contains 16 separate lakes, each one gorgeous and worth a trip to Croatia alone. Their blue and turquoise waters are crystal clear, and although you can’t swim in the water, hiking around them is a perfect day’s adventure. But what really makes this body of water stunning are the waterfalls. The lakes are all connected by a series of waterfalls, with some lakes filled by dozens of different falls. It makes for a spectacular and almost otherworldly atmosphere, not to mention some amazing photos to share with friends back home. The park is open 365 days a year, according to Visit Croatia, making it easy to add into your travel schedule. It’s a must-see destination worthy of any travel bucket list.