of the Most Unusual Landmarks on the Planet

We know there are questions around travel amid the coronavirus (COVID-19) outbreak. Read our note here.

From the Colosseum to the Empire State Building and the Taj Mahal, global landmarks are enduring symbols of art, history, and innovation. They pique our curiosity and inspire us to travel to new destinations. But apart from these well-known sites, sometimes on our travels we encounter unusual buildings that make us stop in our tracks, contemplate the motives of their creators, and ask, “Why?” Read on to discover 15 of the most unusual landmarks in the world, from a church that resembles the glass slipper of a giant Cinderella to a jaw-dropping temple scaled by a 17-story dragon sculpture.

Beginning in the 1950s, Route 66 was one of the main highways for road trippers traveling west to Los Angeles, cruising cross-country in their Cadillacs in search of California bliss. Drive Route 66 through northern Texas today, and you’ll encounter the obscure Cadillac Ranch. Ten Cadillacs stand half-buried by the roadside at a 51.5-degree angle (the same as the Pyramids of Giza). It’s the dream of millionaire Amarillo native Stanley Marsh 3 (the non-Roman numeral is intentional), who wanted to celebrate the Golden Age of the American automobile industry. Marsh collaborated with San Francisco art group The Ant Farm to cover the cars in graffiti — and visitors are encouraged to add their own works of art.

While many of the planet’s most-famous landmarks are visible from a distance, you need to get within a stone’s throw to see this one. The Church of St. George is acenturies-old religious monument hewn from volcanic rock and embedded into the earth. This crucifix-shaped church stands almost 100 feet tall yet barely reaches above the earth’s surface. Access is via sunken tunnels that lead to a labyrinth of chapels and sanctuaries. The church is one of the UNESCO-protected Rock Hewn Churches of Lalibela, named for Ethiopian King Lalibela, who supposedly built them from the 12th century as part of a dream to construct a New Jerusalem.

From afar, Copenhill looks like a typical industrial plant with smoke billowing from its chimney. Get closer and you’ll spot adventurists traveling up and down the sloping roof of this shiny, metal-clad structure — and soon realize that Copenhill is an innovative and futuristic recreational park. There are opportunities to ski, snowboard, sled, and hike here — it’s even possible to scale the outside via the world’s highest climbing wall. All of this activity occurs on top of a waste-to-energy plant that helps to power thousands of city homes, part of a mission to turn Copenhagen into a carbon-neutral capital, and to offer alpine sports in a mountainless country.General4ptsTest Your Knowledge!Besides the U.S. dollar, what is the only major currency to feature bills all of the same size?PLAY!

Perhaps the last thing you’d expect to see when wandering around downtown Kansas City is a collection of oversized book spines of acclaimed literary works. But that’s exactly what decorates the facade of the parking garage of the city’s Central Library. The 22 colorful and realistic spines each measure 25 feet tall and nine feet wide. Kansas City residents voted on the titles selected, which include Mark Twain’s The Adventures of Huckleberry Finn, Ray Bradbury’s Fahrenheit 451, and Harper Lee’s To Kill a Mockingbird.

The High-Heel Wedding Church is an all-glass structure that resembles the glass slipper of a giant Cinderella. This 56-foot-tall and 36-foot-wide shoe-church consists of 320 pieces of blue glass. It’s billed as a non-denominational wedding venue and has an open-air stage set in the shoe’s collar. There’s also a sentimental and folkloric tale behind the creation. As the story goes, Blackfoot disease ravished the region many years ago; to save several local women from death, they had to have their feet amputated and thus lost their dream of walking down the aisle in high heels.

Situated in Rotterdam’s Old Port is an ambitious and bizarre housing experiment by Dutch architect Piet Blom. Blom was tasked with redeveloping the port area after it suffered severe destruction during World War II. The Cube Houses are his attempt to challenge the theory that “a building has to be recognizable as a house for it to qualify as a house.” Each of the colorful three-floor cubes is slanted at 53.5 degrees and perched atop a hexagon-shaped pillar. Some form part of a pedestrian walkway that crosses a busy city thoroughfare. To help visitors appreciate the houses, one of the two super-cubes functions as the Show Cube Museum.

If you are in the business of making baskets, then it only seems logical that your headquarters should resemble one of your products. The Longaberger Basket Building is a kitschy seven-floor replica of the Longaberger company’s Medium Market Basket. The basket-building has two handles that are heated during the cold Ohio winters to avoid icing. It is illuminated at night, invoking the image of a basket-shaped UFO. Former company president Jim Klein and company founder Dave Longaberger both faced challenges from dyslexia, and Klein later called the building a “symbol of overcoming adversity, of what you can achieve.”

Oscar Niemeyer left an indelible mark on the architectural landscape of Brazil. Of the many modern buildings he designed, the Niteroi Museum of Contemporary Art arguably commands the most attention. Perched on a clifftop, the museum appears like a flying saucer juxtaposed against the crystal-blue waters, golden sands, and jungle-clad mountains of Guanabara Bay. Some 300 workers took five years to build it, and in doing so, they used 5,500 tons of material. The museum is 52 feet tall and has a 164-foot-diameter cupola, inside of which are three exhibition floors.

During the Cold War, the Stanley R. Mickelsen Safeguard Complex was established in Cavalier County, North Dakota, to protect the U.S. from Russian ballistic missiles. It featured missile silos, launching silos, and the Pyramid of North Dakota. The latter, a Mayan-like temple structure, was built as a radar for tracking missile movements. However, due to lack of effectiveness in practice, as well as financial and safety concerns, the complex was only operational for a few days. Today it stands as stark a reminder of the Cold War era and an example of military overindulgence. Plus, it’s a worthy side trip for anyone crossing North Dakota’s farmlands via Route 66 —  you’d be forgiven for thinking at first glance that it was a set from a doom-laden science fiction movie.

The Great Wall of China and Tiananmen Square are two of China’s obvious tourist highlights, but just a 90-minute drive from Beijing is another landmark that verges on the bizarre. The flamboyant facade of the Tianzi Hotel stands amid the otherwise nondescript skyline of Tianjin’s Hebei District. It’s adorned withmonumental statues of the Sanxing, who are three Chinese gods from the Ming dynasty. Each god is dressed in elaborate robes and denotes the three attributes required for a good life in Chinese culture: Shou, the god of longevity; Fu, the god of fortune; and Lu, the god of prosperity. Visitors can access the hotel through one of Shou’s feet, and hotel rooms were built all the way up to the heads.

Imagine a rollercoaster with all of the usual twists, turns, and steep drops. Now picture one that is made specifically for pedestrians and recreates the thrill and adrenaline of amusement park rides — without the actual ride. Tiger and Turtle Magic Mountain is the brainchild of German artists Heike Mutter and Ulrich Genth and pays homage to the restructuring and redesigning of the historically industrial Ruhr Valley. But what about the name? It represents the speed of a tiger and the visitor’s ability to experience it at a turtle’s pace. Sadly, it’s not possible to complete the loop on foot — you can blame physics and gravity for that.

The futuristic Turning Torso in Malmö is a reinvention of Spanish artist and architect Santiago Calatrava’s marble sculpture called the Twisting Torso. Calatrava himself designed this mixed-use residential tower, which rotates a full 90 degrees as it rises to its tip. The core of the 623-foot-tall contemporary tower contains the elevators and stairs; spiraling around it are nine cube-shaped units. Each unit has five floors that are used for office spaces and residential apartments, and there is also a 49th-floor observation deck. The tower soars above Malmö’s redeveloped Western Harbor and is the tallest building in Sweden.

Officially named 20 Fenchurch Street, this postmodern monolith designed by Uruguayan architect Rafael Viñoly is often regarded as one of London’s weirdest buildings. It’s an instantly recognizable landmark in the financial district and gets its nickname from its top-heavy design that resembles a walkie talkie. While it certainly grabs attention, the building has been heavily criticized and ridiculed since being unveiled in 2014. The concave facade is said to produce a downdraft strong enough to knock a pedestrian over. It’s also been accused of reflecting sun beams with enough intensity to melt car parts. All of this helped the building win the not-so-coveted 2015 Carbuncle Cup for the ugliest building in the United Kingdom.

Away from the typical Thai tourist trail and scarcely mentioned in guidebooks is the extravagant Wat Samphran Temple. Also known as the Dragon Temple, it has an exotic dragon sculpture that curls all the way up a 17-story cylindrical pink tower. The 80-meter height (262 feet) of the tower is symbolic of the age that Buddha died, while the dragon’s five claws stand for the five precepts of Buddhism. Perhaps best of all, the dragon doubles as a tunneled walkway that lets visitors walk to the top of the tower, where panoramic views await.

If you find yourself lost in the small city of Casey, Illinois, then you can easily orientate yourself by looking for the World’s Largest Rocking Chair. Recognized by the Guinness World Records, this landmark stands an incredible 56 feet tall and 33 feet wide and towers over Casey City Hall. The chair had to actually rock to earn it world record status, so 10 strong residents were called upon for the task. Wondering what the connection is between the city and a giant rocking chair? It’s part of Big Things in a Small Town, a plan by a local artist to increase tourism in the city. Casey now boasts 12 Guinness World Records, including the largest golf tee, wind chime, and wooden shoes. 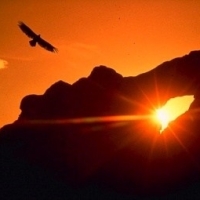